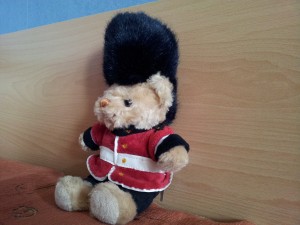 Picking the right name for a stuffed animal can be a challenge. But it can also be quite fun and creative. We’ve picked 20 fun stuffed animal names that we hope will give you some ideas on how to name your stuffies.

The names in question have been picked from the web and suggestions of friends. If you have other cool ideas for fun stuffed animal names please share them with us via the comments below or via our forum. And now…

In order for the fun part to work, the name has to be picked in accordance with the type of toy and animal. If you call a wide-eyed fish Squinty for example it won’t really work… probably.

But you can also go outside the box with names derived from movie characters, word plays and so on. Here we go, in no particular order.

Mandy for a panda. Why? Because Mandy Pandy, that’s why.

Jet for a bird. Or for a water-based stuffed animal. Maybe go for Jet Sky (as in ski)?

Uniq for a Unicorn.

Uncle Ben for an animal that is focused on food.

Jose for a jalapeno… on a stick.

Lorenzo for a Lama as in Lorenzp Lamas.

Lucile for a seal. Say it as lu seal.

Ricky for a dragon as in Ricky the dragon.

Crazy for a fox as in Crazy as a fox.

Coal for a Coala.

Torta for a tortoise.

Rack for a racoon.

Bugs for a rabbit because Bugs Bunny.

Boon for a Baboon.

Nerdy for an owl.

Smelly for a cat. As in Smelly Cat for Friends fans.

Bonus: Another great way to find fun stuffed animal names is to look up the words for the certain animal in other languages. A mouse or example can be called Mishka which is the Bulgarian word for a mouse. Or a teddy bear can be Medved which is “bear” in Russian.