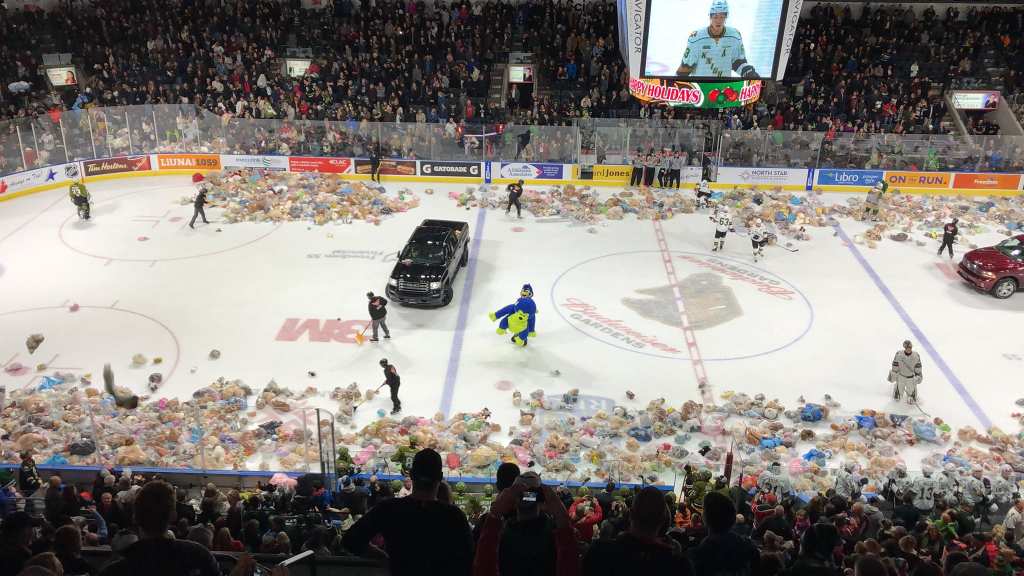 The Teddy Bear Toss season is in full gear. Just this weekend fans donated tens of thousands of stuffed animals at hockey games. And there’s more to come!

The Teddy Bear Toss kings, The Calgary Hitmen, are going to host their biggest event in a few days. But just this past weekend lots of hockey teams already held their Teddy Bear Toss events.

And they are everywhere. From small teams that gathered only a few hundred stuffies, to big names that received thousands of plushies. All events have one common thing – the energy surrounding them and the fact that people know how much something as simple as a stuffed animal can help kids in need.

And often the Teddy Bear Toss events come with their own drama. The Tri-City Americans fans for example had the longest wait until the team scores their first goal of the game. It came at 12:47 in the third period.

This kicked off the 17th annual Teddy Bear Toss of the Americans. Fans threw 3875 stuffed animals onto the ice. The toys will go to local charities which will give them to children in need.

The Syracuse Crunch fans didn’t have to wait that much. Their team scored just 2 minutes and 29 seconds into the game. And the fans threw 3659 stuffed animals onto the ice. The toys will now go to Stanley Steemer for a cleanup. Then they will make their way to The Salvation Army. Also, part of them will go to the Shoppingtown Mall. There a distribution event will give out plushies to children and families in need, as well.

The Lehigh Valley Phantoms also had quite the Teddy Bear Toss. They wanted to beat last year’s record of scoring within 59 seconds. Well, they scored 1:25 into the game. Fans happily tossed thousands of stuffed animals. The tally is not yet official, but there were 8512 fans at the game, so the donated toys will also be quite a lot.

And there’s more! The London Knights scored a big game and win over the North Bay Battalion. Fans donated over 9431 stuffed animals during the Teddy Bear Toss. As you can imagine, this took some time to gather and get the ice ready for the game. During that time, players were chilling in the big piles of stuffed animals.

Needless to say, fans were quite happy. Their team’s coach also had a special night as this was his 700th coaching win. And the Teddy Bear Toss games are still to come!

LEGO Dimensions seems to be getting more and more interesting. The game will now feature...