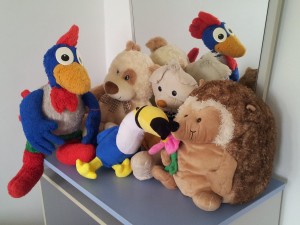 You’ve probably heard it before but is it true? Can stuffed animals cure depression? They can certainly help with the process of curing. That’s what noted specialists in psychology have discovered.

So how do stuffed animals cure depression? It has to do with similar connotations with real pets. We all know having a dog can help depressed people feel better. Cuddling with a stuffed animal can have similar effects.

Reseach from the UV University Amsterdam showed that people with low self-esteem are more prone do depression and anxiety. For these people small details like a light pat on the arm, making small connections with other people and similar seemingly everyday trivial stuff can be very important to feel better.

According to the university such effect can be achieved with stuffed animals. The lead researcher Sander Koole says to the Daily Mail that cuddling with a teddy bear for example can soothe existential fears and can give some sense of existential significance.

Simply said a few minutes cuddling with your favorite stuffed animals will help you reduce anxiety and daily stress. Of course while stuffed animals cure depression to a point they shouldn’t be used as a substitute to proper treatment. Still they are a good way to help out with minor problems and to be an additional help for more serious cases.

Scientists from Boise State University in Idaho also have similar findings in their studies. They tested whether stuffed animals would have the same effects as real animals. It turns out stuffies can help in other cases like Dissociative identity disorder (DID). Also stuffed animals are useful for treating bipolar disorders too.

According to Rose Barlow, one of the researchers in Boise, stuffed animals can aid therapy by providing a way to experience and epxress emotions and have a feeling of unconditional support. This works for both adults and children.

Stuffed dogs have been distributed to children in war zones like Gaza. The stuffies help the children to cope with the trauma. This was an idea of Thel Aviv University. They chose children that had different problems because of the war, says the Jerusalem Post. The idea is that they have to help their new stuffed friend cheer up and not be sad and have to take care of the dogs, called Hibuki.

Some children started to express themselves through the stuffed animals and that helped their teachers and parents provide better care for them. A study based of parents’ testimonies sowed that nearly 83% of the children had stress, separation fears, agression, excessive crying, nightmares and other issues.

Just three weeks after receiving the stuffed dogs children showed improvement. Two month later 71% had lost their their severe stress reactions. This is twice as many as the children who didn’t have stuffed dogs.

So, yes, stuffed animals cure depression but they can also cure many more issues. Researchers are now working to see if stuffed animals can help for other types of life crises like divorce for example. Given their success with so much other problems, we’re confident that stuffed animals will have positive effects on these issues too.

Bottom line is stuffed animals cure depression a lot better than expected. Again, they shouldn’t be used as an only way to help. Especially for more severe cases. But they can be of priceless help.