Just before the holidays, the Bear Hugs Toy Drive brought some much needed joy to kids in need at the Miller Children’s & Women’s Hospital Long Beach.

The toy drive is launched by Liset Meruelo, wife of Cuban-American businessman Alex Meruelo, of the Meruelo Group. The Group’s employees spend time around the holidays to collect teddy bears and donations which they give to children in hospitals.

Liset Meruelo brought along a few surprise guests including costumed characters from Party Princess Productions dressed as “Frozen’s“ Elsa and Anna, and “Star Wars’” Darth Vader, Jedi and a Stormtrooper. This was the 19th year the Bear Hugs Toy Drive brings joy to children.

The power of music

During the visit, Liset and Alex Meruelo made a donation of $20,000 to support the Music Therapy Program – part of the Child Life Program – at Miller Children’s, says their PR statement. There was a special reason. Studies have shown that patients who receive music therapy in conjunction with traditional therapies may need less pain medication, go home earlier, and have decreased levels of anxiety compared to patients who do not receive music therapy.

Music Therapy Program will expand to the Infusion Center at Miller Children’s. The majority of the patients who use the Infusion Center are children and adolescents with cancer and other serious blood disorders, who need to come back to the hospital on a regular basis for chemotherapy treatment or blood transfusions.

“Treatments and procedures done in the Infusion Center can take anywhere from one to eight hours,” says Terreri. “Music therapy can be used as a distraction for patients that may be experiencing anxiety or pain during prolonged treatments.”

It seems Toys R Us is indeed coming back in full swing. These past a... 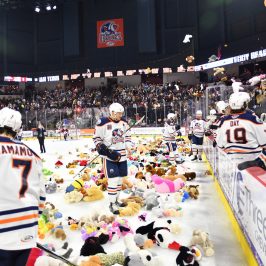